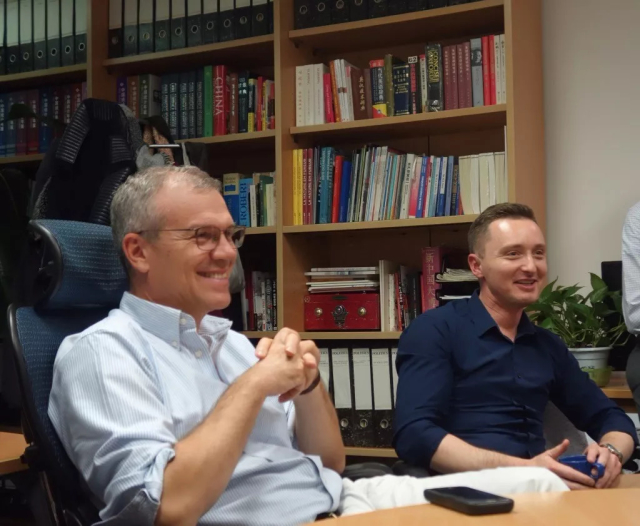 Global Business Journalism students should take time to meet Beijing-based international reporters and reach out to foreign media agencies that don’t have permanent presences in Beijing, Agence France-Presse journalists told GBJ students on October 28.
GBJ students should seek to publish professional journalism work during their master’s studies, AFP Beijing bureau chief Patrick Baert told a group of visitors from the program. By networking with foreign correspondents and enhancing their professional journalism portfolios, the students will have a better chance to land jobs upon graduation from Tsinghua University, the AFP journalists said.
During the meeting with GBJ students at AFP’s Beijing bureau offices in Chaoyang, Baert shared stories from his journalism career and his two tours of duty in Beijing. Baert was recruited by AFP London in 1992 because he was learning Chinese at the time. As a foreign correspondent in Beijing in the 1990s, he covered China’s rapid economic growth and social changes. Fast forward to 2019: He has returned to China, this time as AFP’s bureau chief. Much like diplomats, Baert explained that AFP employees are rotated between offices approximately every five years.
Two other AFP journalists joined the meeting and offered tips for breaking into the media industry in China. These included:
•Meet China-based reporters
•Hear what editors are looking for
•Go to events with the Foreign Correspondent’s Club of China
•Reach out to foreign journalism agencies that don’t have offices in China, because they are often looking for good stories from freelance journalists in China
•Contact media abroad if you have an interesting story idea from China.

Founded in 1835, it is the world's oldest news agency and publishes in six languages. AFP has regional headquarters in Nicosia, Montevideo, Hong Kong, and Washington, D.C., and news bureaus in 201 cities in 151 countries. Its Chinese offices include Beijing, Shanghai and Hong Kong.
Global Business Journalism student Sijia Li of Canada is working as an intern in AFP’s Beijing bureau this year.
(By NATALIE MEYER)