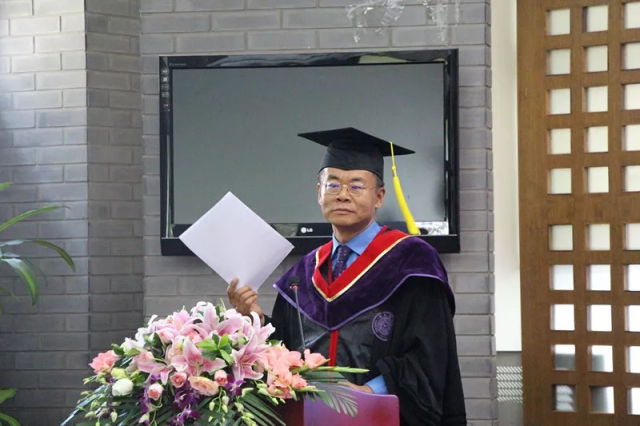 On behalf of the School and in the name of Dean LIU, Binjie（柳斌杰）, first of all, I should convey my heartfelt congratulations to the Class of 2019 of the MJC program in Global Business Journalism (GBJ), with the School of Journalism and Communication, Tsinghua University (TSJC). Today is your day; you are all the shining super stars!

I should also thank all faculty, staff, sponsors, parents and friends to make these young ladies and gentlemen to fulfill their Chinese dream in the “Tsinghua Garden”, one of the most beautiful campuses around the globe recognized by Forbes. Among others, I would make a special mention of wonderful work done by the GBJ co-directors, Professors HANG, Min and Rick Durham, and last but the least, our hard-working and customer-friendly GBJ officers, Ms. Rose Li, Miss Sarah Ma, and all teaching assistants.

In particular, I want to acknowledge the persistent support from International Center for Journalists（ICFJ）, Bank of America Merrill Lynch, the Knight Foundation, and Bloomberg, to make this program happen and sustain for the past decade.

On this special occasion, I want to pay a special tribute to the founders of GBJ program, the School’s founding Dean, Professor FAN Jingyi（范敬宜）, and to our former executive dean, Professor LI Xiguang（李希光），for their foresight of internationalizing journalism education in China.

Since its launching in September, 2007, the GBJ program, as the first all-English-taught degree program in journalism in Chinese mainland, have successfully incorporated the various media philosophies and praxis from both China and the rest of the world, and created an integrative teaching and learning environment with the participation of nearly 30 faculty members and over 200 students from China and over 60 different countries, constituting a growing United Nations of Media in a journalism school. I am honored to make a special mention of Miss 芮娣娜, the first GBJ graduate from Macedonia（马其顿）, constituting the 63th country and region to TSJC’s global inventory.

During the two-year stay in Tsinghua, the Class of 2019 has gained the privilege of witnessing such epochal melodramas as the China-US trade friction, Korean Peninsula Peace Talks, among others, and preparing for the coming of a “new era”. The 19th Chinese Communist Party Congress held in October 2017 has blueprinted for China’s “new era of socialism with Chinese characteristics” till 2049, the centennial anniversary of the founding of the People’s Republic of China. Today China has make an contribution of 36.2% of global economic growth, followed by US (17.9%). To the international community, we have embarked into a truly new era of neo-globalization.

In every respect, the world is currently experiencing an all-encompassing neo-globalization led by China in the wake of Anglobalization in the late 19th and early 20th century, and the subsequent Americanization since the end of the World War II in 1945. Such agenda as neo-globalization is further crystallized into the Belt and Road Initiative (BRI), which was proposed by Chinese President Xi Jinping in September 2013, and obviously inherited from the historical legacies of the land and maritime silk road in ancient China, and arguably resuscitated the heritage of “Marshall plan” in a “post-West, post-order” era.

If Anglobalization is characterized by military conquest and politico-economic colonization and the subsequent Americanization is characteristic of economic/cultural hegemony, the agenda of China-led neo-globalization, as outlined as BRI, grounds itself on trade exchange and intercultural communication, thereby bespeaking the centrality of soft power and co-cultural harmony in the course of reorganizing the old world order with the West as its core.

One distinct divergence between the Marshall Plan and the BRI is their political ambition. The former’s sole reliance on the ideal of “building free institutions” is contrasted by the latter’s all-inclusive, down-to-earth conception of “building a community of shared future for mankind”, which can be further reified as the exigent concerns like anti-terrorism, climate change and epidemic prevention. In regard to practical implementation, the Marshall Plan was characteristic of a quasi-neoliberalist agenda of modernization, advocating that market economy would inevitably lead to democracy and free election; while the BRI focuses upon the concept of empowering the LDCs with their infrastructural and technological development.

One of the emergent global issues is the economic disparities and social polarization, not merely seen in China, wherein 20 million people still live in “absolute poverty”, meaning their daily income below one dollar, but also adequately showcased in the soaring social movements around the globe. The most recent one is “yellow vest protest” in France. As Chairman Mao aptly envisioned in his oft-quoted verse, “In a peaceful world, the entire globe share alike your warmth and cold.”

By the end of next year (2020), the 20m people in interior China would be expected to be  alleviated from the “absolute poverty.” China can finally accomplished the goal of building what Confucian imagined “moderately affluent society,” or what Franklin Roosevelt famously termed as “freedom from want.” To many LDCs (least developing countries), the BRI would provide the platform for sharing China’s anti-poverty experience with the rest of the world.

It is in this light that the Chinese Dream is bearing global potency and relevance. As our alumni “Uncle Xi” succinctly put it, Chinese Dream is people’s dream which provides adequate chances for every “small potato” to shine on their own stage and to make their life meaningful and valuable. Thus, as business journalists or media professionals, you must always keep in your mind that whenever and wherever you are making news coverage: to lend a helping hand to the downtrodden, to give voice and stage for the small potato to shine up, and ultimately to achieve the greatest happiness for the greatest number of people.

According to the latest QS survey, Tsinghua ranked No.16 and has therefore enter into the top 20 club of world universities. In the era of restructuring global order and socio-political formation, I believe that all the GBJ degree holders are not merely showing off your Tsinghua diploma, but have truly gained the consciousness and responsibility of thinking “different” with “humane concerns” for the global 99%. I hope you will observe Tsinghua’s motto “self discipline and social commitment” in your work and life. Ask not what the world can do for you, but what you can do for the global community of shared future.

In conclusion, I am proud of you all and wish you the greatest success in your future career development and lifelong pursuit of freedom, equality and happiness for mankind. Wherever you are booming or roaming, please bear in mind that we are always waiting for you right here, in Tsinghua, your eternal sweet home and haven.The good news is that we are going to make a facelift renovation for our 85-year-old building soon. Thus you will see a newly decorated home for your next homecoming. Whenever you encounter ups and downs, ebb and flows, trials and tribulations, there is always a telepathic melody that all the GBJ faculty and students will sing along: Tsinghua, you raise me up! GBJ, you raise me up!